Pen-One Acquisition Group has filed a patent infringement lawsuit against Apple for infringing their 2007 patent titled "Pen-based transponder identity verification system." The patent covers a point of sales system that uses a stylus signature and/or a fingerprint signature. The company claims that Apple Pay used on iDevices requiring Touch ID or the user's fingerprint to make a purchase infringes their patent. 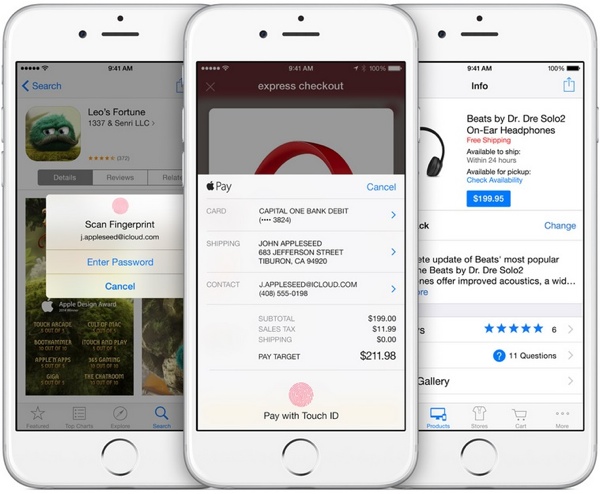 Pen-One Acquisition Group's complaint before the court claims that Apple has infringed patent titled "Pen-based transponder identity verification system." A part of the patent abstract states: "This pen-based, identity verification uses biometric technology. For use in commercial transactions at a point-of-sate terminal, a customer registers advising the system of a customer account that is to be used for payment. The customer also submits a digital signature for reference purposes--a fingerprint. The customer is then issued a transponder that links the customer to the customer account and to the reference digital signature."

The complaint specifically states that "iPhone 6, iPhone 6 Plus, iPhone 6S, iPhone 6S Plus, iPhone 7, iPhone 7 Plus, iPhone SE, iPad, iPad mini, and iPad Pro (each an "Apple device") operating with Apple Pay; each in conjunction with merchant devices, telecommunications equipment, and/or payment processing servers with which the Apple devices operate (the '135 infringing instrumentalities). On information and belief, Apple has developed the '135 Infringing Instrumentalities in partnership with merchants, telecommunications companies, and/or payment processing companies, all of which cooperate to provide the '135 Infringing Instrumentalities." The complaint states that Apple products specifically infringe their patent claims 1, 2, 3, 17, 18 and 19 directly.

Consumer Reports Crowns Apple Pay Cash Best P2P Payments Service Apple Pay Will be Available in China in 2016 This is How the First Phone With a Fingerprint Sensor Under the Display Works iPhone X: Six Core A11 Fusion Chip, Wireless Charging Hints, Apple Pay + Face ID Details and more How to Solve the Problem of Apple pay Could Not Add Card Why Apple Pay Has a Poor Performance in the US? Face ID on iPhone X Does Not Work Below 10% of Battery Charge Google Removes Passcode/Touch ID/Face ID lock from Drive, Docs, Sheets & Slides