Apple's First OLED iPad Coming in 2023, According to Display Experts

Apple is expected to release its first OLED iPad in 2023, Display Supply Chain Consultants (DSCC) said today in its newest quarterly OLED Shipment Report. Apple will enter the market with a 10.9-inch AMOLED ‌iPad‌, which prior sources have suggested could be an iPad Air. 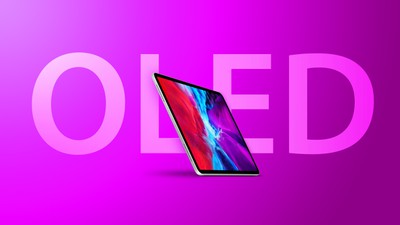 There have been multiple reports about Apple's work on an OLED ‌iPad‌, and the sheer number of rumors all but confirm that the technology is in development. Right now, OLED displays are limited to Apple's iPhone lineup, the Apple Watch, and the MacBook Pro Touch Bar, but Apple has been working to bring OLED to Macs and iPads.

Most of the rumors that we've heard about an OLED ‌iPad‌ suggest that it's coming in 2022, which is earlier than the DSCC report predicts. The Elec recently said that Apple will release a 10.8-inch ‌iPad‌ with an OLED display in 2022, and back in March, Apple analyst Ming-Chi Kuo said that Apple is expected to start using OLED next year. DigiTimes has also predicted a 2022 release for an OLED ‌iPad‌, as have sites like ETNews, which rely on supply chain data.

Kuo also said that Apple's first OLED ‌iPad‌ would be an ‌iPad Air‌ rather than an iPad Pro, with Apple continuing to use mini-LED technology for the ‌iPad Pro‌ lineup. Several reports about the OLED ‌iPad‌ haven't specified that the device will be an ‌iPad Air‌, but that's the general expectation as Kuo often has reliable insight into Apple's plans.

OLED technology is expensive, which is a factor that has thus far limited it to smaller devices like iPhones and Apple Watches. When adopted in the ‌iPad‌, it will bring improved brightness, higher contrast, deeper blacks, and wider viewing angles.

The DSCC report also suggests that Apple will "cancel the Touch Bar" in the future, which is in line with MacBook Pro rumors. The new MacBook Pro models expected in 2021 will do away with the OLED Touch Bar, with Apple instead returning to a standard function row of keys.