Apple's entry-level iPad stocks are running low at retail stores and online, indicating an update to Apple's most affordable ‌iPad‌ could be in the offing and may even arrive as soon as this month. 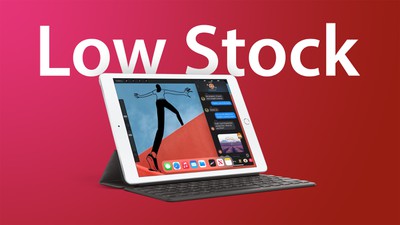 Shipping times for the eighth-generation ‌iPad‌ have slipped into October with three to six week wait times, or are "currently unavailable" in the United States and other online markets, including China, Japan, and some countries in Europe.

With regard to the delays, Bloomberg journalist Mark Gurman says Apple has told retail employees "not to speculate why to consumers." Gurman adds: "Any guesses why?"

Gurman is alluding to rumors that Apple is near to launching a ninth-generation low-cost a 10.5-inch ‌iPad‌ with an updated A-series chip. The display size is expected to remain the same at 10.2 inches, but it is said to be thinner at 6.3mm, with a lighter overall design.

The tablet is rumored to include 4GB RAM with a Touch ID Home button and Lightning port. As with past versions of the ‌iPad‌, it will be aimed at students and those looking for an affordable tablet option.

The entry level iPad is showing “currently unavailable” and/or shipping delays into October. Apple tells retail employees not to speculate why to consumers. Any guesses why? JK. New ones are coming soon- thinner/faster etc. https://t.co/btCgvwDLbe pic.twitter.com/A1cpGHw1jo — Mark Gurman (@markgurman) September 8, 2021

Apple's seventh-generation and eighth-generation ‌iPad‌ models were both introduced at September events, and another one is right round the corner. Apple on Tuesday sent out invites to a "California Streaming" event on Tuesday, September 14, where it plans to debut the new iPhone 13 lineup, an Apple Watch Series 7, and possibly new AirPods.

Apple is also rumored to be working on a redesigned iPad mini, but that device is not expected to feature at next week's event. Apple is expected to hold multiple events in the remainder of this year, so we could see it in October or November instead.

How to Jailbreak iOS 11– iOS 11.4.1 Using Electra Jailbreak on iPhone or iPad iOS 10.2 Yalu Jailbreak Now Supports All 64-bit Devices except iPhone 7 and iPad Air 2 Here Are 150+ New Emoji Coming to iPhones and iPads Later This Year What Is New in iOS 13 for iPhone What Are the Advantages and Disavantages before Jailbreaking Your iPhone and iPad? Apple Releases iOS 12 Developer Beta 11, Public Beta 9 for iPhone and iPad ​How to Watch Apple Event Live? What the iPhone X Costs Around the World?