Apple yesterday released a new version of iCloud for Windows 10, and based on multiple reports and the update's release notes, it appears Apple is introducing an iCloud Passwords extension designed for Chrome, which will allow ‌iCloud‌ Keychain passwords to be used on Windows machines. 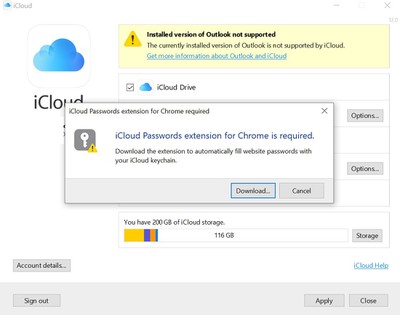 Image via The 8-Bit

As noted by The 8-Bit and a few other sources, the update adds support for an "‌iCloud‌ Passwords Chrome extension." After installing version 12 of ‌iCloud‌ for Windows, there's a new "Passwords" section in the app with an ‌iCloud‌ Keychain logo.

When attempting to use the feature, though, the ‌iCloud‌ app prompts users to download a Chrome extension, but the extension is broken and clicking to install leads to a broken web page.

This is likely a bug that will be addressed in the near future, and it sounds like when it is functional, Windows users will be able to access their ‌iCloud‌ Keychain passwords on their Windows machines through the Chrome browser. It's not clear if Apple will offer this extension for Mac machines in the future as well, and it appears to be limited to Windows at this time.