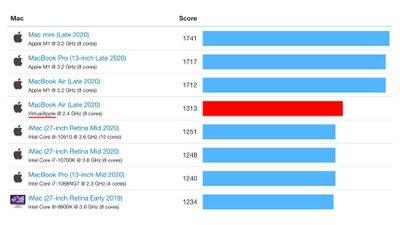 The new Rosetta 2 Geekbench results uploaded show that the M1 chip running on a MacBook Air with 8GB of RAM has single-core and multi-core scores of 1,313 and 5,888 respectively. Since this version of Geekbench is running through Apple's translation layer Rosetta 2, an impact on performance is to be expected. Rosetta 2 running x86 code appears to be achieving 78%-79% of the performance of native Apple Silicon code.

Despite the impact on performance, the single-core Rosetta 2 score results still outperforms any other Intel Mac, including the 2020 27-inch iMac with Intel Core i9-10910 @ 3.6GHz.

Meanwhile, a full chart of Geekbench results is available that will let you compare these scores to any other Mac.