Following the release of iOS 14.4.1 on March 8, Apple has stopped signing iOS 14.4, the previous version of iOS 14. With the software no longer being signed, it is no longer possible to downgrade from iOS 14.4.1 to iOS 14.4 if you've already upgraded your iPhone or iPad. 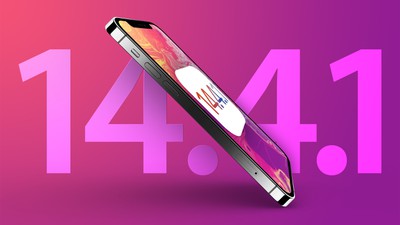 Apple routinely stops signing older versions of software updates after new releases come out in order to encourage customers to keep their operating systems up to date.

iOS 14.4.1 was a security fix update that addressed a WebKit vulnerability that could allow maliciously crafted web content to execute code.

iOS 14.4.1 is the current publicly available version of iOS that people can download, but Apple has also provided iOS 14.5 to developers and public beta testers for testing purposes. iOS 14.5 is one of the biggest updates to ‌‌iOS 14‌‌ to date, introducing a feature for unlocking an ‌iPhone‌ when wearing a mask with an Apple Watch, adding Dual-SIM 5G support, introducing compatibility with the latest gaming controllers, and more.